Le Cam is making a hell of a Vendée Globe in an older boat without modern foils. But where did his boat come from?
The boat, which he has owned since 2015 and is now called "Yes we Cam!" was launched in 2007, the design a collaboration between Farr Yacht Design and Michel Desjoyeaux.
At the time it was called Foncia and that boat would win the 2007 Transat Jacques Favre, the 2008/2009 Vendée Globe and the 2014/2015 Barcelona World Race, among other races while changing its name.

After being Foncia it changed the name to Telefónica Movistar, then Mapfre, then Maître Coq, Mare, Cheminées Poujoulat, Finistère Mer Vent, Corum L'Épargne before being named “Yes we Cam!”.
It was the boat on which Beyou made the 2012/2013 Vendée Globe (abandon) and where Le Cam made the previous Vendée, finishing in 6th place. I doubt that he can make it 6th on this one due to the large number of faster boats with modern foils, unless many of them break. 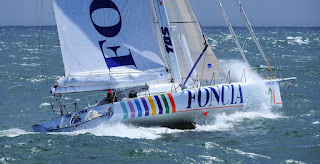 Anyway a fast boat with a big history and one that can be very efficient in IRC races with a class for IMOCAS, because it is not only fast but also more versatile than the current faster boats, sailing better upwind and with lighter winds, an interesting sailboat.
On the photos, as Maître Coq, with Beyou sailing on the 2012/2013 Vendée and as Foncia winning the 2009/2009 Vendée with Desjoyeaux.
Posted by Paulo at 7:45 PM