The black beauty, the fastest of all IMOCA is for sale and now we understand why Alex Thompson did not make the last Transat, the Jacques Vabre, a race that he would have big chances of winning. The Hugo Boss, besides being the fastest is an almost new boat, built only two years ago for competing on the 2016/2017 Vendee Globe.

Contrary to what one could think these are not bad news for Alex Thompson but great news: he is going to have a faster and even better boat built next year to compete on the 2020 Vendee Globe. Crazy stuff?

No, the IMOCA class are from all the offshore racing boats the ones whose development is faster and with all information that was received from the use of foils on the last Vendee Globe it is already possible to build a better and faster IMOCA. Hugo Boss is the best on the water and after having been proved, not only faster solo on the trade winds but also fast with a crew, in conventional offshore races, has a high market value and Alex Thompson wants to take advantage of that to subsidize the new racer.


The asking price is three and a half million euro. If you have the money and want to have a winning boat go for it LOL. Seriously I don't know if that will be the selling price, probably not, but I am sure that the boat will have many interested buyers, not only rich billionaires but most of all major sponsors that want a competitive boat to win some major races, with the right sailor or the right crew.


Alex Thompson has made the best possible publicity to the boat, arriving 2nd on the Vendee Globe with a crippled boat (a broken foil) and even so fighting hard for the race leadership, leaving behind several boats from the same generation in perfect conditions. And even more surprising than that, he has proved that the Hugo Boss, with medium to strong wind, was able to be incredibly competitive on the great offshore classic races.


On the last Middle Sea Race, a month ago, the Hugo Boss was able to clearly beat not only all VOR boats racing but also one of the Maxi racers, the CQS, a yacht that was completely rebuilt last year. He crossed the line in real time in 3rd place. I hope somebody will buy it in time for the Sydney Hobart where the conditions are often strong and if not with too much upwind sailing, suitable to this boat. Curiously he showed on the Middle Sea Race that with strong winds he was not as bad upwind, as most including me would think, even if compared with CQS that is a upwind maximized boat.


As a cherry on top of the cake, Alex Thompson with the feeling all, including Hugo Boss, recognize in him for business, has managed to obtain recently the most incredible sailing images of his Imoca sailing well over 30k and flying sometimes the boat completely out of the water!!!(the first movie).

Hugo Boss, the Sponsor, has maintained with sailing and with Alex Thompson one of the  longest associations on the sport: 18 years and 6 racing boats. Chapeau and a big thanks to Hugo Boss to believe in sailing as advertising. 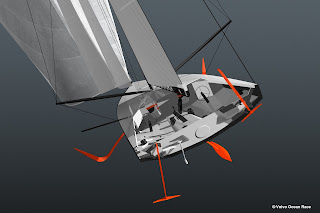 The new Hugo Boss will be the VII. The two last ones were designed by VPLP and Guillaume Verdier. Now that they parted ways he has yet to chose between them who is going to design the new boat. I would say it would be Guillaume Verdier, that I believe is the best designer of offshore open racing boats today.


He is designing the new VOR racer and he can join all the information obtained on the last Vendee Globe, where the leading boats were all designed with his collaboration, with the new research on foils for the VOR, that is estimated at half a million euro and that will come as a bonus to the new design.