I have already posted about this boat when it was still on the paper and was just a design that looked promising. The 400 marks the renewal of OVNI line. It is more modern than previous boats and more innovative in many aspects.


On that post I have compared its technical characteristics to the boat that is its obvious aluminium rival, the Allures 39.9. Some months ago Allures released the 40.9 that is a MKII, the same boat with a more modern and nicer interior even if with the same layout.


The French magazine Voile  has recently made a very  good comparative test between the two boats being both on the water sailing side by side and that allowed clear conclusions in what rgards sailing performance. The links for my previous post and the test that can be downloaded (with the magazine) for 6€:
https://interestingsailboats.blogspot.com/2018/11/ovni-400-modern-aluminium-voyage-boat.html
https://www.zinio.com/voile-magazine-m2581


The OVNI 400, having more beam, less finer entries and all the max beam pulled to the transom is unbeatable in what regards interior space and volume and has a very nice luminous interior with a great layout, a big galley and features an unusually big front cabin.

The cabin is wider at the front because they used the forward part of the hull to install not only a big chain locker but also a sail locker, something very rare on a 40ft boat.

The forward cabin is so big that it can take a head of good dimensions without becoming a bit cramped but space is not elastic and the aft cabin that has about the same width on both boats has a length of less 9cm (1.90) on the OVNI and that can be a problem for big guys. Both boats have a similar standing height, close to 2.00 meters.

Besides personal taste the only point that seems to me better on the Allures is the slightly raised position of the chart table that can be an advantage on crossings with bad weather since it is possible (with the pitch of the boat) to have some forward view while seated. On the contrary you need to stand on the OVNI but then the all around view is much better.

Both boats, assuming two cabins layout, have lots of storage space and dedicated space for watermaker and generator and both have an easy interior access to the rudder mechanism.


On the cockpit both boats have arches at the transom able to serve as davits and that allow the installation of solar panels and wind generators.

Both have big dodgers being the one on the OVNI bigger and having the support of an integrated arch being more solid even if it seems that there is the possibility of Allures having a fixed dodger (look at the photo with the two boats). 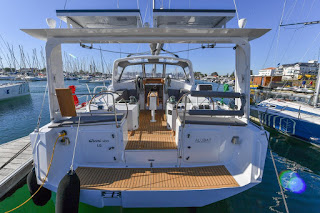 The aft winch position on the OVNI is better  than on the Allures allowing a better and easier use, sailing solo or with a crew. The Allures has slightly more outside storage but that is compensated on the OVNI by the outside access to the inside storage compartment.

Of course that is on the two cabin versions and the two boats can have a three cabin version that does not make any sense on this size and type of boat because the space is needed for storage.


Both boats have nice integrated bowsprits with an anchor stand and the OVNI has a modern slightly inverted bow with lots of buoyancy that contributes actively to diminish pitch and allows a softer passage over small waves and a huge transom that certainly contributes a lot for overall stability and limits roll downwind. 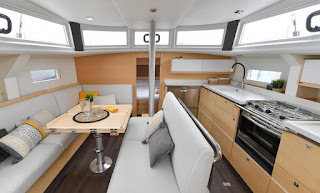 The Allures hull is more conventional having been designed already some 7 years ago but very elegant and with a good performance. In fact on Voiles Magazine test the Allures was always faster than the OVNI and had a much better performance upwind.

They don't give much information about it but they say that with high medium and strong winds the OVNI lacks power upwind and that the small rudders should probably be bigger to give a better control to the boat and I am not surprised with that because when I saw the drawings I was intrigued by how small they were.


It does not seam much but remember that these are centerboarders even if the OVNI has 1300kg ballast on the centerboard. With weak winds the performance should be comparatively worse mainly on the OVNI that with small angles of heel has a bigger wet area.


It is a pity that the OVNI, already with a 1300 kg swing keel,  has not taken the opportunity to have at least a version with all ballast on the keel. It would allow, with the same ballast or even less, the OVNI to be a much more powerful sailboat, one that would not have problems going upwind and could go faster beam reaching, a boat that on most situations would be faster than the Allures and not slower as it is.

But it is always the same problem: money money and boats made to a budget. All that  the need of a bigger mast to carry more sail  and a beefier keel structure would make the boat more expensive. 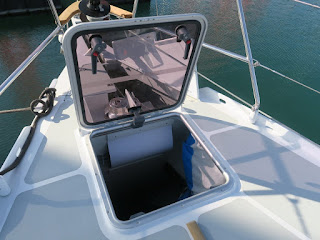 If you are ok with voyaging not on the fast lane, but safely and carrying a lot of stuff, on a boat ideally suited for long range cruising, then one of those two are for you.


If not and you like to have the pleasures of fast sailing then get an RM that certainly will go much faster or if you really want an aluminium boat of this size just wait 2 or 3 years for the new Allures that will replace this one.


You will not only have the advantages of an updated hull but probably also the option  of having all the ballast on a swing keel allowing for a boat 1500kg lighter and with a much better sailing performance.

Or if you have the extra money buy the Allures 45.9 that has that option already, being the boat with all ballast on the swing keel 2280kg lighter than the centerboarder, with the same sail area.