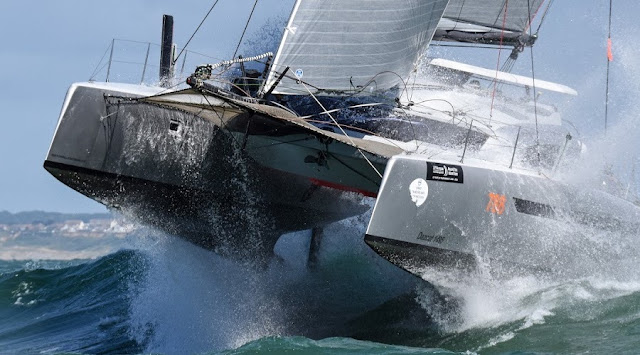 “Fast and Furious: the incredible rise of the cruising catamarans”. That was the name of an article on a Yachting World magazine about the increasing number of catamarans. Besides implying that generally catamarans are in what regards cruising a faster option “offering better speed”, they say also that it is like “having an upgrade”, that cats are getting “bolder and sleeker”. IS THIS TRUE?

Sailing 5 months a year on the Med I have seen the huge increase on cats, specially on the charter fleets, but they are not certainly becoming sleeker, quite the opposite and they don’t seem to have anything to do with sailing fast, not even with sailing since they motor most of the time.

Fast and furious certainly does not apply to the vast majority of new cruising cats being sold: Lagoons, Fountain Pajot and Leopards. Those, while offering a huge interior space and apartment like interiors, do not offer sportive cruising or a good sail performance, specially in lighter winds or upwind.


While being a good option for sailing on the trade winds they are a lousy option for Mediterranean or Baltic sailing, due to the variable winds with a good share of weak winds and lots of upwind sailing.

Of course there are sportive cats that offer a sportive performance but even if their number is increasing they are a very, very small percentage of the number of cats sold and remain marginal.


As the builders of Ice 61 say “the angle going to winward is almost like a monohull (+30º)” but that is on a very sportive cat with carbon foils and low windage hull and cabin. This is probably true in what regards performance cats with daggerboards or foils on the market, being the two best sellers Outremer and Catana.


But if you have a look at their catalogue you are going to see that the smallest Outremer is a 45ft boat and even if Catana has still a 42 the next boat is a 47ft and I will say that soon we will see Catana range to start at 44/45ft.

Why is that? Catamarans offer much more interior space than monohulls and sportive brands of monohulls like Pogo, X yachts, Grand Soleil, JPK or RM start their range of offshore performance cruisers at around 30/33ft, so, having the catamarans size by size much more interior space why performance catamarans start their range at about 45ft, many of them at 50ft?

Yes, in what space is concerned it would make a lot of sense to start their range of offshore boats at least at the same size as monohull performance cruisers, but not in what regards seaworthiness and stability.

That’s because sportive monohulls have a considerably better stability curve than mass production sailboats, having a much lower CG (they have a bigger B/D, more draft and the ballast on a torpedo at the end of the keel) while with sportive catamarans it is the opposite, they have a lot less stability, size by size than condocats.

Sure, sportive cats have a slightly better CG than condocats but since they don’t have ballast the difference in what regards the CG is nowhere close to the difference between sportive cruising monohulls and similarly sized mass production cruisers. 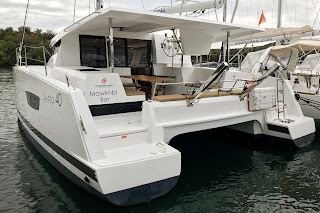 Cruising catamarans have obvious limitations in significantly lowering the CG so and to increase stability they have to increase beam or weight.


Condocats like Lagoon or Fountain Pajot are heavy and the weight is a fundamental factor on their stability. They are also designed maximizing interior space so their windage is huge, they don’t have foils and the performance upwind is lousy.


Comparing to my boat (Comet 41s) I would say more 15 to 20º upwind angle and a slower speed. Years ago, sailing side by side with a Lagoon 400 with optimum wind for the Lagoon (about 17k) I could see that while beam reaching I was just slightly faster (both boats over 9kt on GPS) when we turned upwind in 8nm I won about an hour.


There is a famous video where on an “ upwind race” a slow heavy Amel beat a fast performance cruising cat. The Amel is known to have a bad performance upwind while the Lerouge designed performance catamaran, even if not with foils (that Lerouge consider that don’t make much sense for cruising), is a low windage light fast boat with a much better performance upwind than any condocat.


Performance cruising catamarans with daggerboards are better upwind and even if they cannot beat on that point of sail a performance cruiser they are faster on all other points of sailing, except with weak winds.


On the Fastnet, cruiser racers cats prepared for racing are racing it for several editions and, if we look at the results over the last years and compare them with similarly sized monohull cruiser racers, we will see that in some years the cats are faster in others it is the other way around, depending on the wind and sea conditions.


But cruiser racer catamarans don’t show up on the big Med Classic, the Middle Sea Race and I believe with a good reason: the weak winds coupled with lots of beating on the two first legs would not compensate the advantage they would have on the final leg, beam reaching and downwind sailing, but I would love to see them racing there as I love to see them racing everywhere.


On the Caribbean 600 they are faster than monohulls since it is a beam reaching and downwind race as well as on a Transat or any race on the trade winds but if we look at the ARC we are going to see that size by size they are as fast as performance monohulls of the same size and I have been looking at that for years.Why? 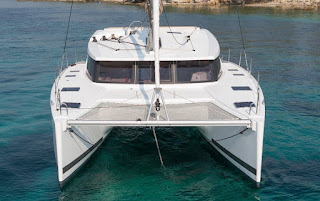 Because even if racing the crews there are mostly cruising crews or amateur racers and while a monohull performance cruiser can be sailed at full blast without safety concerns other than an occasional broach, on a performance catamaran, if the boat is sailed near the limit there is no space for mistake and that demands a very professional racing crew.

On the ARC, the very few cases I have seen performance catamarans sailed at the limit by big professional racing crews they were going faster but on almost all cases, with amateur cruising /racer crews, they go at the same pace as fast monohull performance cruisers, many times slower.


Performance cruising catamarans while being a very good option in what regards sailing and interior space have however a major inconvenience for most: size ad price. The two things are related because to have a great performance they have to be light and the only way to give them a safe stability for cruising is to increase beam and that means for the same stability of a condocat a much bigger performance cruising catamaran and of course, a bigger boat is much more expensive.


It is not by accident that Outremer starts its range at 45ft and that is certainly not because a smaller catamaran would not have more than enough space for a couple, but because performance catamarans have to be big to offer a good safety stability for cruising.


If we look at the edition of Yachting World where they associate fast and furious to the incredible increase on the rise of cruising catamarans we are going to see that the average size of the models they refer as “fast bluewater cruisers” is 54ft and that the average prize is way more than 1.5 million euros. 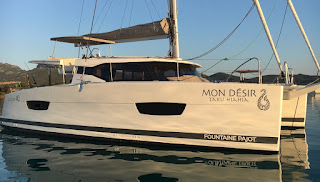 Out of charter, extensive cruising is made basically by couples that can have occasionally another couple sailing with them and for those the size of a 54ft catamaran, exceeds in much their needs for living space and makes the price unnecessarily much higher than the one of a monohull adapted to that sort of cruising, with an adequate level of safety, I would say a boat between 40 and 45ft.

The handling of a 54ft powerful catamaran can also be a lot more complicated than the one of a 40/45ft monohull specially on the Mediterranean where near the coast one can expect huge gusts that can be 3 or 4 times bigger than the average wind.


But even if the costs of maintenance, marinas and ports are much higher, if the boat is used as a permanent living accommodation then a 50 to 55ft catamaran can make all the sense for the ones that have the money to cope with. A much superior area for the use of solar panels can give the boat all the autonomy it needs to stay on anchor and the dinghy storage they provide allows for an easy deployment making live easier.


However I believe that the association of the increase of catamaran sales and their performance is a misleading one: the catamarans that are increasing in numbers are mostly condocats, on the charter and on the cruising market and they are sold not for their performance but for the apartment type of space they offer and for the size of it.

I cannot resist to mention that I see many if not most of those charter catamarans motoring while there are perfect conditions for sailing. I believe that a percentage of the ones that charter them don’t even know how to sail and chart them as a less expensive motor yacht, with two engines, plenty of interior space and a nice big outside covered cockpit: a moving condo. 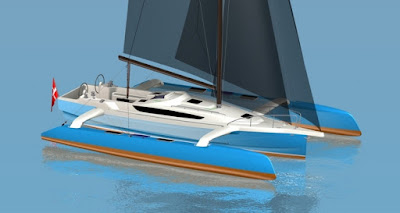 Would I have a catamaran if I had the money for it? Well, maybe but surely not for the extra space but for the fun of the speed downwind, something like the SIG 45 even if that one is a bit on the danger zone in what regards cruising with a couple.


I certainly would prefer a trimaran, maybe the new Dragonfly 40, but for the money they cost I have many doubts I would not find a fast monohull that I would find more appealing.


Even if I had the money it would be out of question because my wife does not want to hear about it: The SIG 45 because she finds it dangerous and the Dragonfly because it has a small interior. She would settle for a condocat but then it is me that would not be interested: no fun sailing it.
Posted by Paulo at 9:26 PM 4 comments: