Well, it is not really unknown but out of France and out of those sailors that really like duo or solo racing, it is pretty much confidential. How I do know that? Just look at the number of views on the videos: pretty much ridiculous. How do I know it is a great race? I have followed it for many years but if you don’t believe me, just look at the sailors that have won or have finished on the first positions:


You get my drift: on the list of winners of this Transat we can find most of the best solo sailors, the ones that today race IMOCAS or have won the VOR and the quality of the participants is very, very high, most of them coming from the minis and having already sailed the Figaro championship for some years. Some that race already on IMOCAS.

Most have been professional sailors for a long time and some of the participants have already a contract and will have a brand new IMOCA for racing the next Vendee Globe, among them the ones that lead for several days and are now 2nd, Simon/Lagraviere. I mean Lagraviere has already an IMOCA and raced the last Vendee, Simon will have a brand new boat designed by JK.


You have also some of the best women sailors, Justine Mettraux that has left the VOR Dongfeng to make it, teaming with Isabel Joschke and Clarisse (the one that finished 2nd on the last mini transat –series) teaming with Le Turquais.


As usual the race is very interesting with lots of different routing options. I will not be following it here since I am going to sail away and don’t have time to post anymore but the important thing is to draw your attention to this race.

You can follow it on your own and if you like sail racing you are going to love it: great sailors, small one class fast boats, lots of them (20) and to make things more interesting, they have already had bad seas and over 30k winds off the Portuguese coast and probably more will be on the way. Two boats retired with broken masts and one with a broken boom…and the race is just beginning. Enjoy the AG2R: http://player.georacing.com/player_ag2r2018/

Now that all seems to be defined on this leg, it is time to have a look at the race: A new race leader, Dongfeng, a new leg winner, team Brunel, that made an impeccable race. Dongfeng made a magnificent effort to catch Brunel, that had managed a 50nm advance, but it fell just a bit short, only 15 minutes, after 17 days of race.


Dongfeng is leading the race without having won any leg and it may very well win the race without any leg victory. The rules with double points on some legs  and points earned here and there contributes to that. Dongfeng have already won several Port Races but those don't add any points on this edition.

Four legs to go and one, Newport to Cardiff, with double points. Four boats can still win the race, Mapfre and the ones that made the podium on this leg. This has been a very competitive edition and in what regards that, one of the best VOR ever.


About the new boat there are big news: it seems that it will be designed following the IMOCA box rule and that will allow not only these boats to race the Vendee Globe but also the ones that race the Vendee to race the VOR. Probably the masts will be different (bigger the one for the VOR) as well the running rigging that will be adapted either for solo racing or for crewed racing.

This idea was proposed from the beginning but was initially rejected by IMOCA. Things have evolved since then and there are now very promising talks between the two organizations and the designer, Guillaume Verdier, regarding the possibility of a a boat that could race both races. Verdier is also the best IMOCA designer so it should not be difficult for him to design a great new VOR, faster, easier to sail and offering a better protection to the crew.


The New VOR would be considerably beamier with a bigger RM, a superior stability, easier to sail and therefore not needing such a big crew as the VOR65.

Recently Thomas Luven, the two time winner of the Solitaire du Figaro and navigator of the VOR65 TTP was asked in an interview if the VOR 65 was a completely missed design, as it was said by Charles Caudrelier, Dongfeng's skipper. He made some expert explanations that help us to understand
what is wrong with this boat.


In the opinion of most skippers, it is a boat "completely missed" as said Charles Caudrelier.

"In what regards racing, at the conception level, this boat is far from being a marvel, says Nicolas Lunven. It is heavy, but not very stiff in what regards sail area. It must be sailed with lots of sail area for sailing fast, but it does not have enough righting moment. When the sea is strong, it is hard to steer, and heels too much. It is too difficult to get into speed. It is necessary all the time to make sail changes. The center of gravity of this boat is high, so it is unstable. It is very tiring to maneuver. You need a big crew. For sure it is strong, the structure is very reinforced. If we pushed like that on a crewed IMOCA, it would break in a week. "

The next boat, currently being designed by French architect Guillaume Verdier's team, would be a mix of VOR 65 and Imoca. It should be able to be crewed and sailed solo after some modifications. Plans are eagerly awaited.

"It will be designed differently, says Lunven, It will be necessary to ensure that it offers better protection, that will be more efficient, at least four tons lighter and with an heavier bulb so that it is stiffer to the sails" (interview to the Journal Ouest France, translated)


And it is with great satisfaction that I hear also some saying that the organization of the VOR is thinking not only about changing the actual crew rules but also the model of the race. The actual crew rules make this race something strange: it's the biggest offshore crewed sail race but instead of being raced by the best, is raced by crews with a mixture of top sailors, rookie young sailors and women both chosen not by their intrinsic value as sailors, but because their choice allows bigger crews.

What I heard makes a lot of sense: the actual VOR 65 will be raced by young crews, with an age limit and top IMOCAS will be raced by smaller crews (they talk about 4 to 6) of top sailors, the best sailors in the world. That would make the VOR a real top race not only by its difficulty but because it would reunite all top sailors.That is far from happening today.

CIRCUMNAVIGATING BY THE HORN ON A MAXUS 22

That's crazy? Yes, lots of risks taken if we consider that Szymon Kuczyński, the Polish sailor that is doing that, is making it solo and non stop. I am not an apologist of promoting craziness but the fact is that this sailor had done it already by the Panama canal four years ago on the same boat. I posted here about it: http://interestingsailboats.blogspot.pt/2014/11/circumnavigating-on-small-coastal-boat.html

This circumnavigation is a completely different affair, he is not only doing it by the Horn, sailing on the Southern ocean at high latitudes, but he is also trying to beat the "record" circumnavigation for small boats established by Alessandro Di Benedetto 8 years ago on a modified 21ft mini racer, a kind of record I don't think  should be encouraged.


It is just too dangerous and on the sportive level it means nothing. Sure one has to be a great sailor to do that but there are a huge number of great solo sailors and the competition between them in equal terms is what counts for sportive meaning. The Mini transat results are by far more meaningful regarding the competitiveness of solo sailors on small boats than any of these circumnavigations that are adventures. 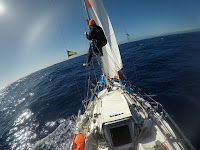 Confirming the risks these high latitude circumnavigations in small boats have, both Benedetto and Szymon had the boats crippled near the Horn, having capsized over 90º. Benedetto lost the mast and had to improvise a jury rig that allowed him to complete the circumnavigation.

Szymon has not lost the mast but has made a bent on it and it was so weakened that he had to dismount the boom and strengthen the mast tying the spinnaker pole around it, using also several cables for better support. He is only using forward sails to diminish mast lateral stress.


Benedetto not stop circumnavigation on the mini racer and Szymon one on the Maxus 22 will remain as incredible feats not only in what regards sailing but mostly in what regards living for half a year under atrocious conditions in a tiny space crowded with all the food one needs for survival for that time.


Let's hope his mast holds on till the end. He is not far from finishing, but not far is still a lot of miles to cover. He is entering the doldrums and approaching the equator, almost entering North Atlantic. You can follow his track here: https://share.garmin.com/atlanticpuffin 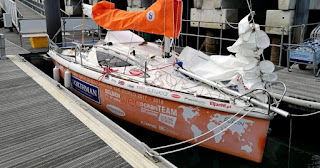 The Maxus 22 is a polish made boat, a good design but this boat was modified expressly for doing a circumnavigation and the differences in strength, seaworthiness and stability are huge.

The original Maxus 22 is a category C boat, a boat for sheltered waters when this Maxus 22 could probably bee certified as Class A and certainly as B.


This boat, the Puffin, has not made "only" two circumnavigations with this sailor, but also other offshore voyages and among them one made by two Polish girls, Katarzyna Sałaban and Dobrochna Nowak, from Poland to Iceland and back, a cruising voyage this one. 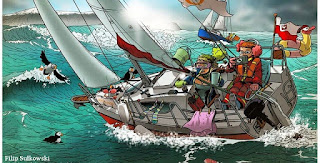 The objective is to prove that it is not needed a big and expensive boat to cruise offshore.

Benefiting from the publicity these extensive offshore voyages  have done to this boat the shipyard could and should make a replica of this very special Maxus 22 and offer it as a small series, as an offshore category A or B sailboats, even if at the cost of a much higher price. I would be very interested in knowing how much such a version would cost.


I hope you don't buy a standard Maxus 22 and try to sail it offshore, much less to cross the Atlantic on it. Remember the standard Maxus 22, in all its comercial versions is only certified category C, an inshore sailboat:" boats operating in coastal waters and large bays and lakes". All this publicity about a Maxus 22 circumnavigating can be dangerous if someone thinks that they are talking about a standard Maxus 22.