Bad luck strikes Pip Hare: She was sailing a 22-year-old boat, the oldest boat on the race, and making a fantastic Vendée. She was in the middle of the classification, having overtaken and leaving behind Alan Roura and Arnaud Boissieres, who are sailing in much more modern sailboats, with new foils.
But one of the rudders broke and we can see on this video a desperate Pip Hare, with the boat with the sails down, on a rough sea, saying that she has a spare but needs a calm sea to try to make a rudder replacement. Pointing to the stormy skies she says that bad weather is on the way and that she does not know when she will have conditions to change the rudder. We can see the despair on her face!

In this video, we see Pip Hare training the maneuver in the port with help. Now imagine doing it alone in the sea conditions shown in the previous video. I would have said that was impossible and the same opinion was shared by the land team that said that she should wait TWO DAYS for better sea conditions.

But she must have thought: I had so much work and suffering to be where I am and am I going to let everyone pass me, losing two days? NO!!!

And she attempted, and incredibly succeeded in replacing the damaged rudder in those sea conditions! A strong will is half the way to do anything, but I still don't understand how she did it.
Last time I took the rudder out of my boat to repair it took three big men to put it in place, two on the ground to push and one on top to pull the guide cable. The rudder on my boat is a deeper single one, bigger and heavier, but even so, alone and with the rudder moving around on the agitated waters, it seems impossible to me. 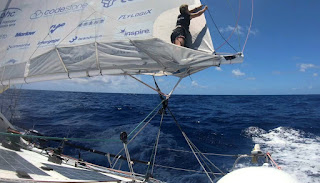 Pip Hare just joined the Legend of the Vendée, not that of the winners, but that of men and women who did incredible and seemingly impossible things to continue in the race, and those will be remembered as much as the ones that won the race.
She only has to finish the race to have accomplished a huge feat, not only sportive but in what regards endurance and resourcefulness.
In what regards the race, with the repair, she lost 210 miles for Roura and Boissieres, that have overtaken her, but she is already on the chase, and being faster than them. 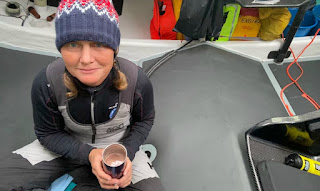 Cheers to Pip Hare that didn't have a big experience with IMOCA, started the race slowly but has become faster and faster to the point of making miracles in what should be the slowest boat in the race and also the more uncomfortable and hard to sail. All the more modern boats offer much bigger protection to the sailor, from the sea and wind, and when the temperature is very low, like on the austral ocean, that can be a big advantage and save a lot of energy.
She deserves a better boat and I hope that after this fantastic race she can get the sponsorship for getting it, even if it is much more difficult to find one in the UK than in France. Certainly, Medallia, a customer feedback management software platform, that sponsors her boat has more than its fair share of publicity revenues with this fantastic performance.