Yes quite an alarming title but the subject has become serious to the point of World Sailing (ex- ISAF), the world governing body for the sport of sailing, to become seriously concerned and being on the verge of taking preventive actions.

The facts: surely everybody remembers the keel that some years ago fell off a Bavaria Match 42  and recently all know that an almost new 90ft Oyster lost the keel. Some know about two First 40.7 but less know about a Bavaria 390, a Jeanneau 37, a Vand den Stadt 45, a Sweden yacht 42, a Fast 42 a Maxi 110, a Max Fun 35 or more recently a Comet 45 and some days ago a Davidson 50.

Nor many know that since the mid 80’s more than 75 boats have lost the keel with the loss of  28 lives.

Probably the numbers of keels lost or boats abandoned offshore with problems on the keel are way bigger and much bigger the number of boats that were found with keel problems before actually a disaster would occur. These are only the numbers regarding the cases that were found by a a work group formed by World Sailing to study the problem and most of them were high profile cases.

Some of the keels were lost due to the contact with the ground or submerged objects, some due to poor design or poor building like the cases of the Match Bavaria 42, the modified Oyster 825 or the Max Fun 35. Others due to the weakening of the structure as a result of bad maintenance, groundings whose damage passed unnoticed or were improperly repaired while others, like the recent case with the Comet 45, remain a mystery.
https://www.vgyd.com//wp-content/uploads/Keels-Falling-Off-9-5-13.pdf

Although the Comet 45 has been recovered I don’t know of any investigation going on by the boat builder. Fortunately the boat was British and used in charter and MAIB has opened an investigation to the accident some days ago.

The number of keels lost is increasing and will increase much more in the next years if nothing is made, simply because boats with bolt on keels (almost all today) will become older and the lack of maintenance and the number of damages due to keel grounding will become bigger with time, as well as material fatigue with the results that are to be expected.

Fact is that most think that a keel does not need maintenance unless obvious signs of degradation start to appear but that's a keel repair, not keel maintenance. Maintenance should be preventive and should obey to a determined schedule, as it is made for rigs or for saildrive seals. 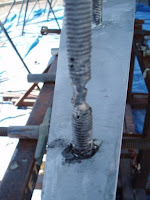 Even in countries where the legislation demands a mandatory regular yacht inspection the problem is not addressed simply because there are no clear industry guidelines in what regards proper maintenance and material fatigue for keel and keel structures. If it looks good and there is no obvious signs of corrosion or if there are not clear signs of problems on the outside of the keel, then it is OK.


Better than nothing but clearly insufficient and that leads us to the core of the problem: even if there is in the EU legislation that protects and gives warranties to consumers regarding the design of recreational and personal water crafts, the RCD, there is none in what regards inspections or accident investigation.

There is a directive and an agency (EMSA) regarding accident investigation but only in what concerns maritime transport, none regarding recreational and personal crafts. Most countries don’t investigate recreational craft accidents in any way, much less in a detailed way.


And if recreational craft accidents are not seriously investigated there is no way of collecting relevant information that will allow the detection of building or design problems and other shortcomings like de ones that are related with the lack of proper maintenance.

That feedback is necessary to update the RCD in a way that contributes to erradicate those shortcomings in what regards boat design and improve boat security. It will also provide information regarding keel maintenance and adequate schedules.

There is a need for an EU agency similar to EMSA (European Maritime Safety Agency) for recreational and private crafts, or a branch of it that occupies itself exclusively with that subject and we need European standards and procedures in what regards yacht accident investigation and yacht inspections.


In the absence of such an agency in Europe (and in the rest of the world) it is World Sailing that, seriously concerned with the increase of dangerous accidents with keel losses, on an interview to the magazine Yacht.de, states their intention for creating a mandatory keel system inspection and to increase building inspections to determine that the design specifications are fulfilled in reality and not only on paper.
http://www.yacht.de/aktuell/panorama/5-spektakulaere-kielverluste-der-welt-seglerverband-reagiert/a116027-page2.html#start

In fact it was verified that at least in one case the designer specifications were not entirely followed and, being the actual verification of conformity regarding RCD requirements basically a paper one, it is necessary to improve that verification and for what I suspect, not only in what regards keels but also in what concerns boat stability. 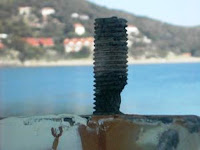 But World Sailing has only jurisdiction regarding the sail boats that race on events that follow their rules, not regarding the vast majority of crafts including cruising sailboats. Their good example is better than nothing but it should be followed in what regards all offshore boats and not only the ones that will race on World Sailing events.


We need an agency with the power to provide those measures not only for boats used for racing but for all offshore yachts if we want safer and better built and maintained sailboats.