I know Paolo Semeraro personally, a passionate man who loves to build fast sailboats, and I truly believe that doing that is more important for him than making a big profit out of boatbuilding business. I am amazed he manages to stay in business because, contrary to all, he does not cut in anything, material or design, for making less expensive boats and to offer the best product at the best price. No, Paolo makes the best sailboats, no matter the price.


Once I  suggested to him that it would make sense not to go so high in quality, to offer a less expensive product, but still a great boat, at a better price, but he was not interested, and curiously that instead of diminishing my respect for him has increased it.

His boats are expensive if compared to less performant and cheaply built alternatives but that's the cost of high quality and if compared with similar products (that are very rare) the value is high.  We are talking about a full carbon boat with a huge B/D. Carbon boat building is expensive and a boat with a big B/D and a moderate beam is much more expensive to build than a very beamy boat with a smaller B/D, even a fast one like Pogo.

The efforts are much bigger everywhere and everything needs to be stronger and more expensive, for a gain in speed that is not big downwind but remarkable on all other points of sail, especially upwind. Of course, I am only talking about Pogo regarding hull and B/D comparison, because otherwise, this is a much more expensive boat but also a faster one.


Another difference is the type of keel. While Pogo uses a swing keel that is a great alternative for cruising, this one, on the performance cruiser version, uses a much more expensive lifting keel that allows a true torpedo on a foil, that is not only much more efficient in what regards lowering the CG (with the same weight) as it offers lesser drag.


In handicap racing the use of carbon can have disadvantages and in what regards the other Neo, the 350 and the 400, they have limited success as winning boats at a high level, even if on strong conditions, on the 2014 Middle Race, the Neo 400 won the IRC Class 2 and came 3rd overall, being  4 hours faster than the J122 that won the race (in compensated) and 4 hours and a half faster than the 2nd, a XP44. 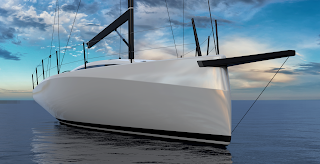 The Neo 350 made 5th on the last ORC World Championship and that is a good result taking into account the number and quality of participants. But the fact is that there are very few Neo racing at top-level and it is impossible to know if they are not winning due to that (and the quality of the crews) or because they are not competitive on handicap racing as other boats, like for instance JPK or Sunfast. 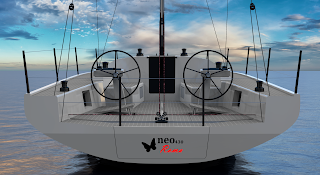 But certainly, they have already proved that with a top crew they can do very well, even winning in compensated, while being among the first in real-time, leaving behind much bigger boats. In what regards performance cruising they are rockets and probably they are, size for size, the fastest production cruiser-racers.

For cruising they offer a very light functional interior with carbon furniture integrated on the boat structure, but here resides one of the few divergences I have with Paolo, unless you enjoy living on an interior that looks like the one of a space ship.

Ok, it can be a question of personal taste, but I believe that many that are potential clients are not Italians, that typically use the boat from marina to marina and live not for long periods on the boat, but North Europeans and Americans that will sail the boat extensively and live aboard for many months in a year.


For those, I believe that the interior should be less stark and cold, kind of industrial-like. In what that regards Pogo has a nicer looking interior even if that does not mean necessarily a more functional one.

I believe an interior designer could create a much more appealing interior and that has nothing with being heavier, at least not significantly heavier, but warmer and cozier. Polished black carbon or white surfaces can have an interesting decorative effect, if used sparsely, but having it all in white and black it is just too strong for creating a relaxed and comfortable ambiance to live aboard. The interior can be customized but that is not the same thing as to have the interior designed and conceived by a good interior designer, unless the client wants to find one to do the job, and that would be expensive and time-consuming.

In what regards all the rest I can only say very nice things: this is the best size for a high-performance cruiser, one that offers all the interior space and storage needed, a size that can be handled conservatively by a solo sailor, the seaworthiness to go anywhere and the torpedo lifting keel (3.0/1.6m) that offers the best of two worlds, the best performance with the ability to enter the smallest ports and to look for shelter on anchorages very near the coast.


The yacht is designed by a very good NA cabinet, Ceccarelli Yacht Design, with experience in designing fast cruiser-racers like the Grand Soleil 80, the Azuree 33 and the Azuree 40 among others. 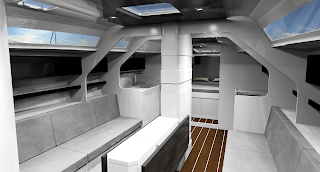 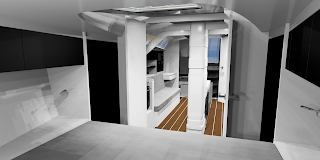 
Considering the Pogo with the fixed keel version, the one that has also a comparable torpedo keel, the Neo has a much bigger ballast, 2700kg to 2000kg. But the difference is much bigger than what those 700kg may suggest because the draft difference, is huge: 3.00 to 2.20m.


That makes the two boats very different: one taking more of its RM moment from the beam, the other more from the ballast and if downwind performance will not be much different, upwind, especially out of flatwater and in lighter winds, the Neo will be much faster.

There is a good reason for Pogo to be designed and built as it is, that's the way to have the best compromise between performance and price, but the Neo is not about compromises, it is about max performance and in what regards that and the materials and way it is built, it has a reasonable price, about 500 000 euro (without VAT), for a very light and well built full carbon/epoxi yacht and with a very expensive Cariboni lifting keel. Without the lifting keel and the two-rudder set up, the racing version is not as expensive.


The Pogo 12.50, half a meter smaller, with a carbon mast but with a less efficient swing keel and built with fiberglass and polyester resins, costs 234 538 euros, a very good price. Of course they are not comparable. The Pogo aims to offer the best performance at the best price, the other wants to offer the best performance no matter the price, and as it always happens, the difference in price is not proportional to the difference in performance, but it is like that in every field where performance is the aim and you can find similar examples on racing or sports cars. 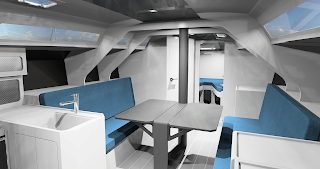 The bigger difference is that as a cruiser-racer the Pogo 12.50 will not be competitive in handicap racing and will only be comparatively fast with other performance boats of similar price on beam reaching or downwind races like for instance Transats or the Caribbean 600, while the Neo 430 will be not only competitive in handicap racing as it will be among the fastest boats of its size, no matter the race and conditions, except maybe with very light winds. 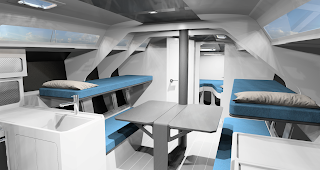 The interior is also different due to the need of a vertical box for the lifting keel system, that is relatively small and serves as post for the deck stepped mast. I don't like the galley on the performance cruising version that is subdivided between the two sides of the boat and that doesn't offer any body support while sailing.

The racing version, due to the need of big crews in several days offshore races, has 3 cabins being the frontal one smaller due to the head and the layout has much less storage space.

For having a comparable boat I would have to compare it with one-off yachts made by some specialized shipyards like Knierim or McConaghy that cost much more, so expensive that very rarely they built cruiser-racers of this size, starting with 50 ft boats.

Italian sailors love speed and there are other Italian shipyards building carbon cruiser-racers (some optionally) brands like Mylius, Ice or Vismara but none of them built boats smaller than 50ft. The only brand that offers a production full carbon performance cruiser-racer of comparable size is the Arcona. 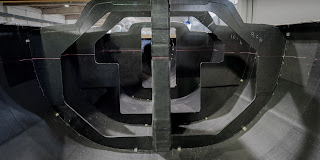 The Arcona 465 is a full carbon boat and the 435 can be built optionally in Carbon but they are not built in Carbon-Epoxy, but Carbon-Vinylester, being epoxy stronger and more expensive. They have not a lifting keel, are heavier and slower sailboats, but have also a much nicer interior, even if not a very light carbon one as on the Neo 430. A full Carbon Arcona 435 costs 401 602 euros (without VAT).

The Neo 430 is a boat built by an enthusiastic builder for enthusiastic sailors that want to have the fastest performance cruiser around or for racers that want not only to win IRC/ORC races but to finish among the first boats of the same size, even in top races.


And of course, for sailors that have the money this type of boats necessarily cost, but even if not many can afford it it is great to have such a boat on the market and on the water and the boat is already a success, with 4 boats sold, a performance cruiser in Italy and racer-cruisers in USA (ORC), Australia (IRC) and Hong-Kong (IRC).

Even less have the money for beautiful Maxi-sailing yachts but they make the world a more beautiful and interesting place and the same can be said of this boat one that even if relatively small will not pass unnoticed and will arouse admiring looks from anybody that likes sailing.