FIRST 36: ON THE WATER AND LOOKING GOOD

The last post of the season, I mean, the armchair sailing season 😀. Before the end of the month, I will fly to the south of Italy to start the sailing season, and for some months I will have too much fun for having time to continue with the blog. 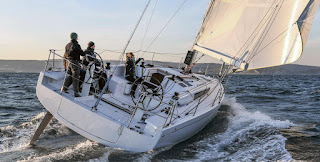 The last post is for the First 36 because the initial impression I have about the boat has changed a bit. I confess I was a bit pissed with the First 36 lack of ambition and with the price but the truth is that the boat,  without looking innovative, looks better than in the drawings. The interior looks incomparably nicer in the photos.

I have not seen the boat yet, but I have seen photos, two boat tests and a video and the First 36 looks definitively better now. The saloon and the cabins look comfortable enough to make life enjoyable while cruising on the fast lane.

Unfortunately, the head is as bad as I thought it was, and having an unpractical foldable washing basin on a boat with these dimensions, a boat that will be more used for cruising than for racing, does not make sense. It would be way better if they had opted for a two-cabin layout (instead of a three-cabin one), with one of the aft cabins transformed into storage space, using the rest of the space for a "normal" head. 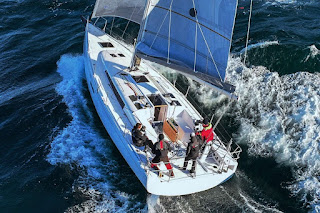 And I say it would be used more for cruising than for racing because now, having a better look at the hull design, it is clear that this boat is not going to be competitive in IRC or ORC, being too much downwind maximized, and even in downwind races, like the Transquadra, I don't believe it will be as competitive as the JPK or the Sunfast. Neither will it be competitive with them in races by boat length, like the Silverruder.

The First 36 would make a lot of sense if it had managed to follow the previously announced program intentions. Andraz Mihelin has stated about that: The First 36 would offer almost the same performance as a Pogo 36, for the price of a Dehler 34 (with a price lower than 150,000 euros).

It was not meant as a fast top cruiser-racer (a boat with an overall top performance) like the Sunfast or JPK, but as a very fast performance cruiser, that would offer great cruising potential and fun, for a lower price. The target was the Pogo 36. 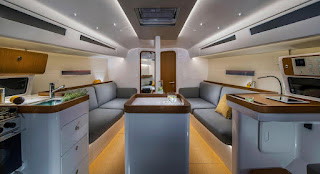 It seems to me that they missed completely the price target (by 33%) and that will make the First 36 a boat difficult to sell. On the "Yacht.de" sail test, they said that the First 36 sailed "amazingly" but they would have said the same if they were testing the Pogo 36 (that is probably faster), and all that follow racing know that, overall, the Sunfast 3600 and the JPK 10.80 are faster than the Pogo, except in downwind races.

The First 36 costs much more than the Dehler 34, costs even more than the Pogo 36, and it is very near in price of faster and better racing boats, like the Sunfast 3600 or the JPK 10.80. It has also to compete with the J112e which, like the JPK, has a great racing record (the J112e is a bit more expensive).

The JPK 10.80 has a good cruising interior, with a worse galley than the First but a better head; the J112e, being faster than the Dehler, has an excellent cruising interior (as good as the one of the Dehler) and only the Sunfast 3600 has a more naked and less comfortable cruising interior (but with a bigger and better head). You can see photos and the layout of those boats here:
https://interestingsailboats.blogspot.com/2021/11/new-first-36-much-awaited-yacht.html
And the interior of the Dehler 34 is here: https://www.hanseyachtsag.com/dehler/us/boats/dehler-34/

We will see how the First 36 sells, but one thing is for sure, it would sell much better if they had managed to keep its price similar to the one of the Dehler 34 😉.