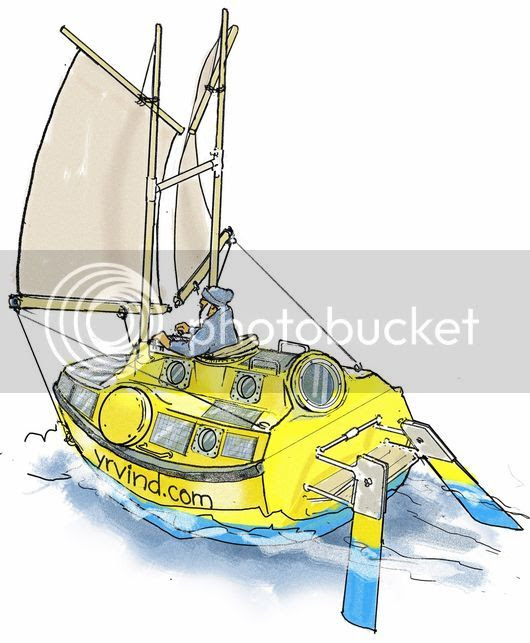 He is working on the boat with the help of some friends. The ones that never heard about Yrvin, a well known Swede,  will probably think he is crazy: He wants to circumnavigate on a home built 3.0m boat passing by the Horn on a 54000km voyage that will take 600days (at an average speed of 2K) taking with him as provisions 400kg of sardines and Musli. The water will be mostly rain water collected by the sails and funneled to an interior deposit. No heating, no instruments, except his own designed  mini sextant (image below).  He will take with him also 100kg of books to fight boredom.  http://youtu.be/pm79kH2BBMY


Yrvind has a lot of sailing experience: he had accumulated it through 50 years of navigation (yes, he is 72 years old !!!!). You may think that age is a problem (well, at least it is to me ;-)) but just two years ago he crossed the Atlantic on a 4.5M sailboat (the one on the movie at the bottom of the post). Before that he made several always successful Atlantic crossings and one of them on North Atlantic, from France to Newfoundland, back in 1989.
He says about him and his boats:

"People have said it's a suicide mission...but a big boat is actually more dangerous than a small one. You've got bigger forces throwing you around -- a bigger engine, a bigger beam, a bigger deck...my small boat is like a little capsule -- nothing can happen to you. It's like throwing a bottle in the water -- it will capsize, it will pitchpole, but it will always come back up.

I need just half-a-kilogram of food a day and this will give me enough food for 800 days...In the beginning I will have fruit but obviously that will run out. I also have a friend in Melbourne with a boat who will come out with supplies.
On land, people are watching TV, driving cars in traffic, smoking, drinking it's not healthy..out at sea it's a cleaner environment -- mentally and physically. When I come back I will be a healthier, younger person. This will prolong my life, not the other way around." 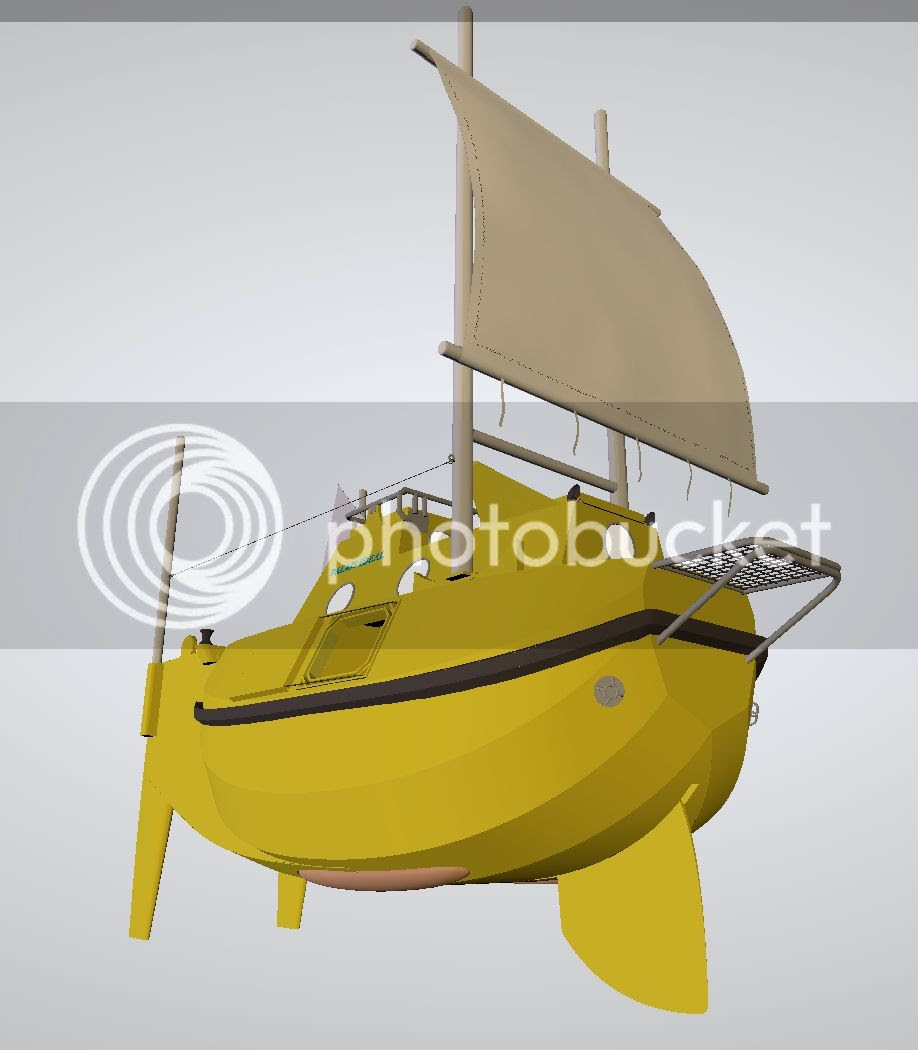 A philosophy I am sure  will not be shared by many but I am happy that there are men as Sven who chose alternative living ways and the fact is that after my annual 120 days summer cruising I feel younger too, even if I do not sail months on end without seeing anybody and generally at the end of some days at sea I find a nice oasis on land for a coffee and a drink :-). I am sure that the sense of accomplishment that Sven feels after successfully  finishing his voyages is simply huge (and well deserved too) and that will give him all the reward he needs to keep going.

One who seems to express some doubts about this circumnavigation is the British Robin Knox-Johnston the first to make a nonstop circumnavigation in 1969. He says he believes Yrvind will have some real chances to make it but he adds: "One of the biggest challenges he'll face is when he's coming up against these massive 25 meter waves in the Southern Ocean. In a boat that size he's just going to be rolled around and around like he's inside a giant washing machine...he might also find he's using a lot more energy -- and will need a lot more food -- being rolled around like that.” Very British the irony :-) but the truth is that Yrvind is used to capsizes and pitch poles. He says about it: 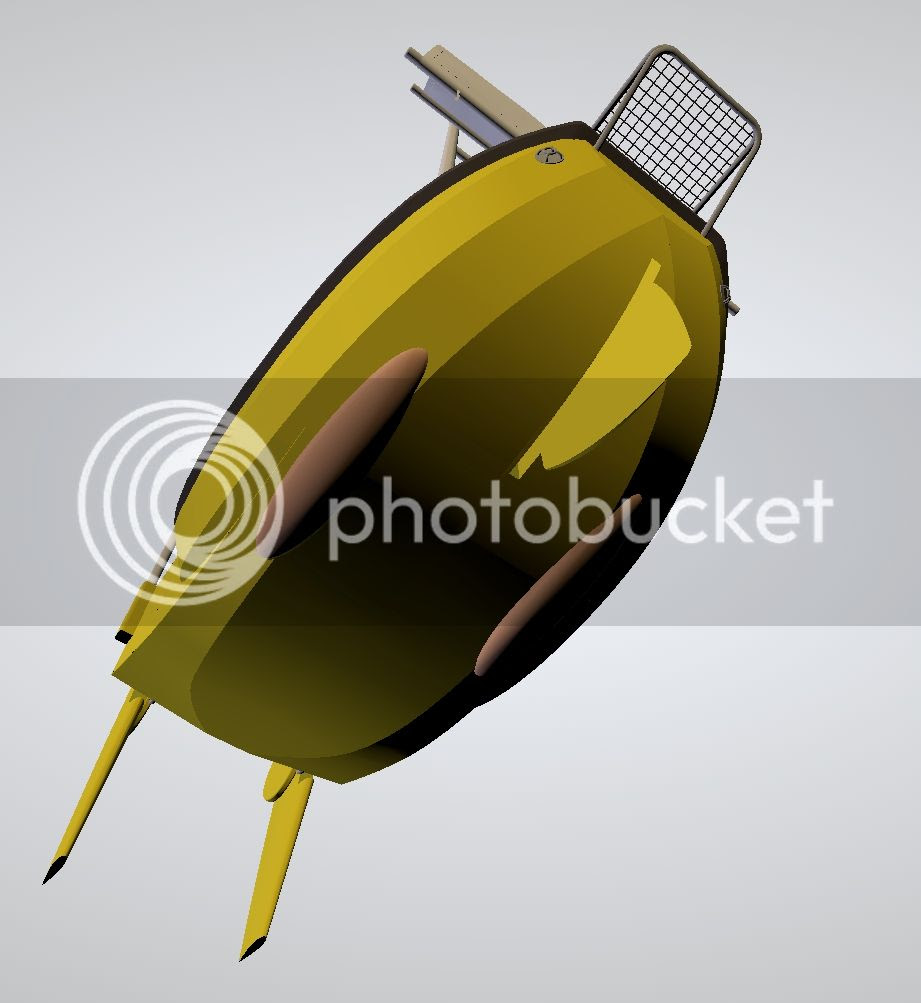 “The boat will flip, not once but many many times. It will flip forward and sideways, but I cannot see how any damage can be done….I have experience of capsizing and of pitch-pooling. The first Bris had a 20 feet mast. She was capsized and pitch-pooled near Cape Horn and then once more capsized on Georges Bank outside Nantucket a stormy March night. The second Bris was knocked down to I am guessing 160 degrees near Uruguay after successfully rounding Cape Horn. Only the time when the boat was pitch-poled was there no sails up. During the two capsizes and the 160 degree knock down I had sails up. It was freak waves. The 19 feet long Bris II also had an 20 feet mast.”

Sven major concern has to do with  the mast not to be broken in  a capsize. He has studied a double mast set up that allows that, unless both masts hit the water at the same time, one mast will reinforce the other. With the two mast set up it was necessary to rethink all the sails that have to be adapted to that configuration (picture on the left).

The boat has a 3.0m length, 1.90m beam, a draft of 0.44m and will weigh 1500kg!!!. The masts will have 6.0m and the hull shape is reminiscent of the old Portuguese XVI century galleons. That shape will add a lot of stability but the boat will sail  with a lot of pitch. Those big rudders and the frontal board will allow it to sail against the wind without too much of a leeway. The boat has a cored hull and epoxy resins were used. I have no doubt that it will be a massively strong boat but with all that weight, a short LWL, I believe those 2K will be a  realistic speed...if he does not gets too many headwinds or strong contrary currents. It is going to be a very long voyage and a big challenge even for Yrvind. All the luck and fair winds to him, he will need it to succeed on this "madness".