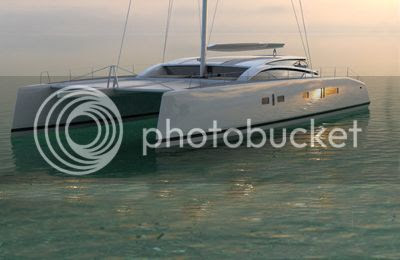 Big news on the Italian yacht  building Industry: One of the oldest Italian yacht shipyards is on the verge of big changes; they are going to start a catamaran series that will join their line of performance cruisers and big performance yachts.

The Comar shipyard, the builder of Comets started in 1961 as a small operation, manufacturing some of the first Glass Reinforced Plastic boats (GRP). Today more than 5000 sailboats have been built, some with 100ft. One of the more recent  is a 85ft training vessel for the Italian Guarda Costieira and I can only say that they are very lucky to train in such a  boat. I bet they are going to win a race or two also ;-)

A delicious story regarding homologation of the first GRP boat, the"Flying Junior", back in 1961 :

"The hull was painted brown and received false wooden veneers. They put the boat to a Boatyard well known for building classic yachts. When the RiNa (Italian Naval Register) engineers were coming to the yard to homologate a big yacht, they showed to them, in an obscure corner that small dinghy, presented as a diversion from the daily work, kindly requesting them to homologate it too. Considering the Yard's fame and grappling with an important boat, those engineers didn't hang about in evaluating that "small (apparently) wooden Jewel" and so they unconsciously gave wings to that flight which has taken us so far."

Comar had started as an advanced and pioneering shipyard and was associated with the name of some of the more innovating and better XX century NA, first with Vand de Stadt and then with Jean-Marie Finot .
What many don't know is that Finot worked in collaboration with Vand de Stadt on one of the more famous  and first Comet boats, the 1971 Comet 910 and it seems it was the end of their relationship because both denied later the credit for having designed that boat :-).

Anyway the 910 was a huge success on the race and cruising fields. The boat had a MKII, the Finot re-designed 910 plus and that hull was produced during 20 years, till 1991, a rarity in Europe. Almost 500 boats were built.

In the 80's Comar collaboration with Finot continued as well as the innovation. Finot designed for Comar some of the best and more interesting boats of the 80's, among them the Comet 11/111/375, 13/460 and 14/15, that were among the first production boats to incorporate Furling main and furling genoa with all commands brought back to the cockpit.
Launched in 1987, the 460, using the hull of the 13, was a very elegant boat, one that today still looks classic. 122 of them were built, a big number for what was then a "big" yacht, specially if we consider that from the previous 13 (1982) 45 boats had already been made.

On the late 90's Comar leaved Finot and started a collaboration with more classic Italian designers particularly Andrea Vallicelly (bigger boats) and Sergio Lupoli (smaller boats). The production was then more oriented towards fast but less innovative boats, boats more influenced by rating rules.
From that phase, that reaches today.,we have the Genesis 43 and the current boats with the S line (26,31,38,41,45 and the 50). Also the big RS line, also Vallicelli designed.

But  if the contemporary Comar production is constituted by very nicely designed and good looking yachts, with great cruising interiors, that can, and have been, winning races, there is no doubt that some of the spark that had made Comar a XX century benchmark, in what regards sailboat innovation, was a bit lost in the process and today Comet even if still making great boats is not particularly noted by very innovative designs, more by well built fast sailboats designed on the "tradition", kind of classic performance cruisers.
Nothing wrong with that, brands change with time and Comar is producing very nice sailboats. Whoever on the Comar case it seems that change towards a more classic approach has not been definitive. The brand is coming back to its  origins, innovating again and the first steep was towards an unexpected direction: Catamarans, kind of a first on the Italian boat building production market. They say about it:

"Comar’s 2014 begins flying the Cat banner “because they are comfortable, easy to handle and control and because we are keen on the idea of creating a multihull with a fast and aggressive profile yet maintaining the comfort below deck. We noticed an affinity in Marc Lombard’s designs with the present Comet range in production and hence collaboration with Marc seemed a natural choice for the start-up of this new range which, starting with a Comet Cat 62 will then move on to an 82’ and a 37’"

Not many images or information has been released about the new Cats that are been designed by an innovative major NA, Marc Lombard, but we know that all, except the smaller one, will be carbon boats and that they will be all very fast boats. The main dimensions of the 37 and 62 have been revealed on the Dusseldorf boat show, were some small models  have been shown.

The Mahe is a great cat and a fast one too, kind of a classic, but the Comet 37 should be faster even if I would have preferred it with the same beam as the Mahe. Upwind the difference in pointing ability will be bigger as well as the performance, specially on the 37 equipped with movable daggerboards. The daggerboards are big since the draft is 2.24m and that means that the upwind performance will be very good. The daggerboard version offers less drag too.

If we compare the 37 with a more main market cat, for instance, the Lagoon 380, that is only 25cm bigger, the difference in performance should be huge since the Lagoon weights 7.3T against the 4.5T from Comet that has slightly more upwind sail area.

I like also the position of the steering wheels, on the side, allowing a good forward visibility.

Regarding the Comet cat 62 I can only describe it as a truly gorgeous boat and even if the 37 is unusually good looking, for such a small cruising cat, the 62 is just a beauty and certainly a very fast beauty. We have only to look at his dimensions and building file to see that:

And the surprises will not end here since I have heard rumors that the monohull series, specially the middle sector, will be renovated with some new boats, not on the line with the existent ones, but something different from what the Italian market offers already. Performance cruisers, for sure but, designed also by a French NA and that means probably with a bigger influence of solo racer's design and maybe something lighter, maybe something in carbon. I can't wait to have my eyes on those designs and to know more about it ;-)